Christianity has always been involved in education, from the very earliest communities teaching those about to be baptised, to present-day churches’ involvement in schools and higher education. Christianity has a core theological concern for teaching, discipleship and formation, but this is overlaid by a long and complex history of the various relationships between churches and education.

From simple instructions in the ‘rule of faith’, Christian communities developed forms of catechesis, and still more sophisticated instruction for those more advanced in the faith. This raises questions about the relationship of such practices to the educational traditions of Greece and Rome and to those outside the Roman Empire. Did Christian education develop differently in Byzantium and in western and northern Europe? Monastic education clearly played a crucial role: but who precisely provided it, for whom and to what ends? To what extent was monastic scholarship acquainted with non- Christian and heretical texts? How did the education of the faithful differ between monastic and parish contexts? How was it affected by successive reform movements and new forms of Christian asceticism? Many of these questions continued to resonate in the early modern and modern worlds, when the question of churches’ interactions with to other sources of scholarship and education became acute, and when encounters between different brands of Christianity and between Christianity and other religions intensified and broadened, not to mention the growing engagement between Churches and the modern State, as well as secularity.

Possible themes for communications might include Churches’ role in or engagement with:,

​We invite submissions which are innovative in their mode of presentation, subject to the usual time constraints. Possible ideas might include the use of music or recorded sound; presentation in dialogue; the performance/presentation of pedagogical materials.

Early stage graduate students are also invited to submit (in lieu of a paper proposal) a poster indicating an aspect of their current research. PLEASE NOTE: this need not relate to the conference theme: anything that falls within the remit of the Society is welcome. A selection of posters will be printed and displayed for discussion at the conference.

Postgraduate students should also be aware that the EHS offers a number of generous bursaries which cover the FULL COST of attending the conference, and half bursaries for those who already have some funding from other sources. Forms for these will be placed on the website in April.

Booking forms and a timetable will appear on the website closer to the time.

You can also download a copy of our poster and call for papers. 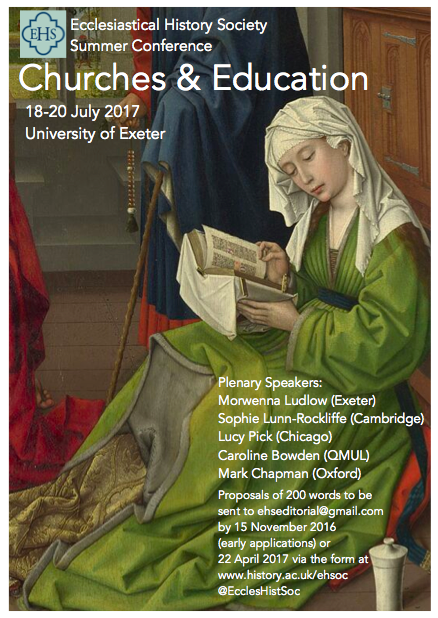