Call for Papers: Conference ‘The Church and Empire’

From its beginnings, the Christian Church has had close, often symbiotic relationships with empires and imperial power. Christianity emerged within the Roman Empire; it was shaped amid persecution and martyrdom by imperial power. Then, in 313 AD Constantine granted Christianity toleration, and soon it became the official religion of the Roman Empire, influenced by Roman imperial institutions. Following the collapse of the Western Roman Empire, Christianity remained the religion of the Eastern, or Byzantine Empire until its fall in 1453. In the West, the connection of Christianity and imperial power was revived in the ninth century with the Carolingian Empire – which was itself again revived in the tenth century – and with the Anglo-Norman, Genoese and Venetian Empires.

The medieval and early modern periods saw re-conceptualisations of empire as both a theoretical structure of rulership and a political-theological order. This included conceptions of papal dominium through the idea of universal empire and Christ/the pope as dominus mundi – as well as emerging notions of ‘regnal imperialism’, with ‘the king as emperor in his own kingdom’. Henry VIII famously based his claim to supremacy over the Church on the idea that ‘this realm of England is an empire’. The Russian Tsarist Empire was from its beginnings associated with Orthodoxy and conceptions of Moscow as the ‘Third Rome’.

From the sixteenth century, the Churches were connected with European empires in the Americas, Africa and Asia – the Spanish Empire, the Dutch Empire, the French Empire and the British Empire. These empires were driven primarily by the pursuit of wealth and power, but they developed Christian and humanitarian missions – women playing prominent roles – including efforts to suppress slavery. The connections between the Bible and the flag were ambivalent; while men and women missionaries sometimes supported empire, they were frequently its greatest critics. Another aspect of empire and its after-echoes was (and still is) the extraordinary mass migration first of European peoples, and then of those they colonized, too, and the resultant growth and diversification of Churches.

The conference and winter meeting will explore the relations of Churches and empires, and Christian conceptions of empire, in the ancient, medieval, early modern and modern periods, as well as the role of empire in the global expansion of Christianity.

Proposals of around 200 words should be submitted to ehseditorial@gmail.com by 15 September 2016. 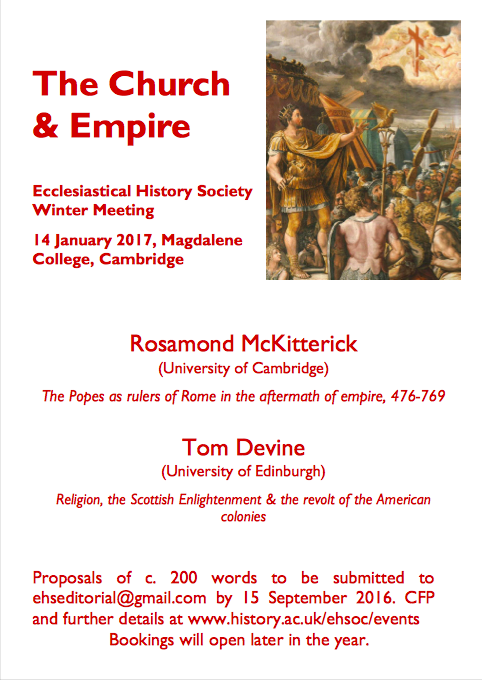