How are national cultures shaped by their significant others? How are transnational models used to articulate collective expectations, dreams, and anxieties? The twentieth century was marked by the rise of the United States as a superpower. Over the decades, the spread of American cultural influence abroad sparked considerable debate in Europe. The global footprint of America – be it economic, political, or cultural – has long been a topic of research in various fields, including American studies, transatlantic studies and (global) history. The ‘Americanization’ of Europe to which scholars subscribed in the past has since the late 1990s been replaced by a focus on cultural interaction and local appropriation. This shift in outlook, with its emphasis on the complexity and hybridity of cultural interaction, underlines how poorly we still understand the question of America’s world-historical role in cultural exchange and underscores how little we know about the reciprocity of transatlantic perceptions.

The conference Constructing America | Defining Europe addresses the question how America served as a contested model for Europe, as a ‘reference culture’, and, no less importantly, how Europe played a comparable parental and adversarial role for America. The relationship of the two continents has always been fraught with ambiguities. The United States has often been portrayed as a hallmark of modernity, even if modernity is something said to have originated in Europe. The United States was perceived as lagging behind Europe with regards to health care, social welfare, and racial and social integration, while Europe has been identified with undemocratic and colonial rule, and was burdened by a past of internecine warfare and external oppression. These differences can partly be ascribed to political or ideological positions – what may appear progressive to some, can be read as conservative by others – but also demonstrates that mutual perceptions are closely tied up with specific issues and cultural icons, and are thus highly contextual.

By focusing on the mutual perceptions of America and Europe, this conference investigates the way cultures on both sides of the northern Atlantic referenced each other. It does so by drawing attention to cultural perceptions, and more specifically to the overarching patterns, domestic functionalities, and geopolitical contexts of those constructions. We also welcome contributions that compare the transatlantic connections with perceptions from other parts of the world, offering a comparative global perspective from Latin America, Asia, Africa, Australia or the Middle East.

The conference will focus on the following three domains:

Abstracts (max. 250 words), accompanied by a brief CV, can be sent to constructingamerica@uu.nl no later than Tuesday 28 February 2017. Participants are kindly requested to develop their abstract into a paper, to be submitted two weeks before the conference taking place on Thursday 9 and Friday 10 November 2017.

The conference ‘Constructing America | Defining Europe’ is organized by the research group Translantis. The Emergence of the United States in Public Discourse in the Netherlands, 1890-1990, a joint research project of Utrecht University and the University of Amsterdam funded by the Netherlands Organization for Scientific Research (NWO). 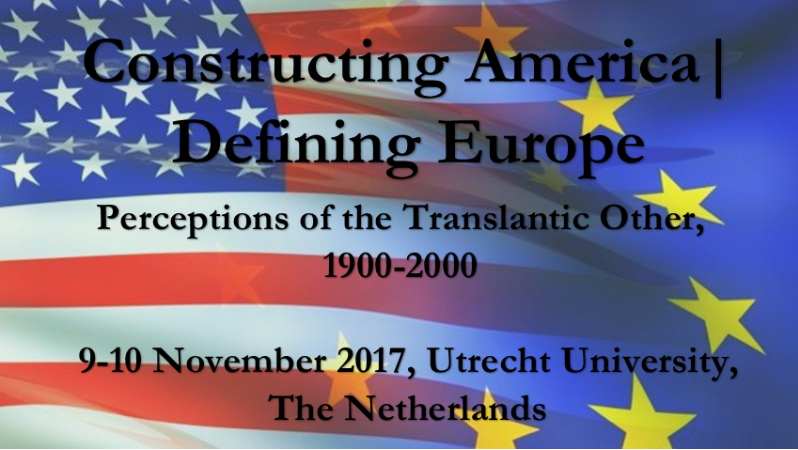