This conference explores the concept of reference culture as a way to approach the cultural dimensions of territorial and non-territorial power. By studying reference cultures we want to draw attention to the fact that cultures may assume a role as benchmark or model, both positive and negative, in the international circulation of ideas and practices.

Reference cultures offer a model that other cultures may imitate, adapt, or resist. In contrast to essentialist and territorial concepts such as empire and nation, the idea of reference cultures allows us to address the shifting subjectivities central to cultural encounters. We take reference cultures to be mental constructs or “cognitive maps” that do not necessarily represent a geopolitical reality with an internal hierarchy and recognizable borders. They may take the form of imagined empires and may also be informed by utopian visions or mythological pasts. Such reference societies are typically established and negotiated in public discourse over a long period of time. 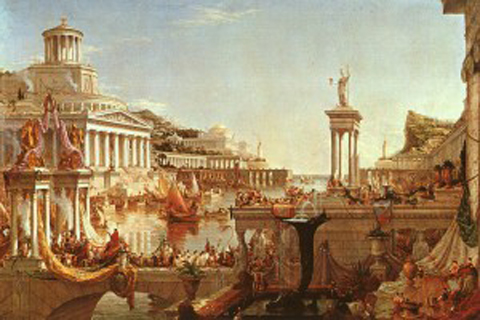 The academic discussion suggests that the interplay of political and economic supremacy with the “soft power” of cultural attraction and reputation plays a crucial role in how certain cultures establish guiding standards for other cultures. Historical examples such as the Dutch Republic in the Golden Age, nineteenth-century Great Britain, twentieth-century America—and perhaps twenty-first-century China—point to the importance of reference cultures.

This conference aims to open up this new field of historical inquiry by exploring the role of these transcultural models within western history in the nineteenth and twentieth centuries. This includes transatlantic history as well as the complex cultural relations between the West and “the Rest”. We encourage papers that explore and interrogate the concept of “reference cultures” by investigating its theoretical and empirical validity, or by exploring concrete historical examples of transnational or trans-local referencing, cultural adaption/hybridization, or resistance.

The conference aspires to open an interdisciplinary exploration of “reference cultures”. We warmly welcome a dialogue with ongoing debates in relevant academic fields such as European studies, American studies, cultural history, empire studies, postcolonial studies, literary studies, history of science, transfer studies, and comparative history. Methodologically, we are interested both in conventional historical approaches and in approaches based on digital humanities.

Participants are encouraged to discuss the various manifestations of reference cultures during the nineteenth and twentieth centuries, such as:

Conference participants are expected to cover their own travel and hotel expenses, and the conference fee of €75. Since a selection of the papers will be published in an edited volume, we request that all papers are based on original work that has not been published previously. Those interested in presenting a paper are kindly requested to submit a 250-word abstract for 20-minute papers (indicating any equipment/technical requirements) and a brief biographical note by 1 May 2014 to dr. Pim Huijnen (p.huijnen@uu.nl) or dr. Jaap Verheul (j.verheul@uu.nl), History Department, Utrecht University, the Netherlands.

Further information and updates will be posted on the conference website: www.translantis.nl.