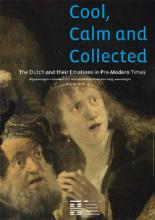 Cool, Calm and Collected: The Dutch and their Emotions in Pre-Modern Times

The conference ‘Cool, Calm and Collected’ aims to enhance the burgeoning history of emotions in the Netherlands. Speakers at the conference will present their current research, integrating the study of emotional standards in advice literature with the study of actual emotional practices in ego documents, chronicles or archival sources. The fields covered will range from politics, philosophy and the urban feud to religion, the stage and the visual arts. The conference will not only be of interest to specialists in the history of emotions but also to the greater historical community.

Although the history of emotions was already suggested as an interesting topic by Lucien Febvre and Johan Huizinga it has been taken up seriously as a subject of historical study only fairly recently. Initially, historians limited themselves largely to the study of documents that prescribed emotional ideals and standards. Researchers are now going beyond such texts. They are currently identifying transformations in emotional ‘communities’ and ‘styles’ on the basis of letters, autobiographies and memoirs, as well as a variety of narrative, archival and visual sources. Historians are also emphasising performativity, what emotions actually do. At the institutional level, in Europe two important research centres have been started: in London the Queen Mary Centre for the History of the Emotions (Thomas Dixon, director); in Berlin the ‘Forschungsbereich Geschichte der Gefühle’ (Ute Frevert, director). This conference seeks to establish a more solid footing for the history of emotions in the Netherlands and join in with these international trends.

The speakers at the conference will discuss the emotional styles of the Modern Devouts and the cult of pugnacity in Late Medieval feuds. Focusing on the seventeenth century, they will reconsider the performativity accorded to the emotions in painting, the theater, and pietist religious movements. For the eighteenth century, speakers will analyse the Dutch ‘cult of sensibility’, the contemporary appreciation and navigation of the sentiments. The day will be closed with a lecture by Dorothee Sturkenboom. She is a pioneer in the study of emotions in the Netherlands and will relate the emotional history of the Dutch to contemporary and more recent views on their ‘national character’.

The conference’s keynote lecturer, the well-known English historian Thomas Dixon, will discuss the latest developments in the field.

The conference will take place in the National Library of the Netherlands (KB) in The Hague.

The conference fee is € 30,- (€ 25,- for members of the KNHG and € 15,- for students and PhD students) and includes lunch. The conference fee should be transferred to account number 6934391 of Nederlands Historisch Genootschap in The Hague.

History in British Tears: Some Reflections on the Anatomy of Modern Emotions

‘Just some silly Beguine’: being pious and showing it in the Devotio Moderna

Anger and Feuding in the Late Medieval Northern Low Countries

Vondel and the Role of Emotions in the Public Sphere

The Use of Emotions by the Hotter Sort of Protestant

Phlegmatic Excitement. The Dutch and the Discovery of the Emotions in the 18th Century

The Passionate Politics of Rutger Jan and Catharina Schimmelpenninck: Dialogue between the Head and the Heart.

The Dutch Temperament: An Enigma to be Explained…

16.45 – 17.30 Reflections by Dixon, Roodenburg and Santing, followed by Plenary Discussion