‘Broken windows’ and the danger of fragmented workplace

In a recently published study by the economist David Weil The fissured workplace, the author addresses the issue of growing social inequality by analyzing the process of increasing outsourcing of labour by big firms who use this strategy to lower labour costs. Although this book mainly deals with the United States in the last decades, it is also relevant to Europe and beyond.

The basic argument is that from the 1980s onwards with the rise of neo-liberalism the pressure of capitalism to maximize shareholder value has increased dramatically and that as a result especially big firms, like Apple, have reacted by outsourcing the production (and partly development) as much as possible to subcontractors who pay less and don’t care too much working conditions. Although this process is well known, think of the rise of China and other Asian countries as the workplace of the world, Weil takes the analysis a step further by also looking at various constructions to shift the responsibility for wages and employment standards to third parties within the U.S. He especially warns against the gradual normality of this process which can only be stopped when societies (and organized labour in the first place) start replacing ‘broken windows’, in stead of letting the deterioration spread, using the ‘broken window’ analogy from tolerating small crime which leads to mounting social problems. Although he could not refer to Piketty’s recent book Capital in the twenty-first century, that came out too late, there are striking parallels in the timing of the ‘fissuring’ of the workplace and the increasing inequality of wealth, both of which took of sometime in the 1970s. And it may be clear that both phenomena are causally linked, through the liberalization of the financial and capital markets and the prominence of short term share holders interests and private equity firms. Both studies are furthermore complementary in the sense that they deal with two sides of the medal: capital and labour. 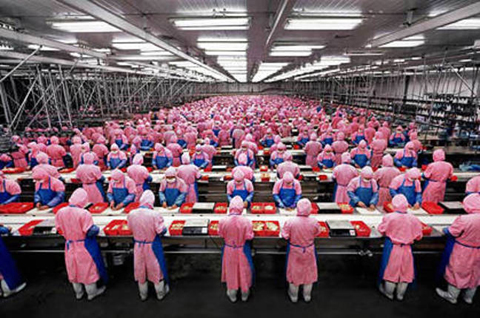 Weil’s study is important and stimulating, while raising important  questions. From along term perspective, the first obvious question is, how new this phenomenon is and what we could learn from possible earlier instances. Secondly, notwithstanding the apparent danger that Weil signals, we should ask ourselves, whether the shift of secure jobs to other forms of labour relations is per definition a bad thing and what the role of workers preferences should not be given more attention.

As for the novelty of ‘fissuring’ , we should not forget that the relative high level of wages and job protection is a relative recent and Western phenomenon, intimately linked to the rise of the welfare state and the establishment of high tariff walls against imports from the ‘Global South’. Moreover, taking a more global and historical view, we can conclude that the position of wage workers that is now under threat coincided (and still does) with extreme exploitation of labour in Asia, Africa and parts of Southern America. To fight the degradation that Weil, justly, describes, organized labour (as well as organized consumers) will have to go global, following the example of the IndustriALL Global Union. And to some extent that is also what we see happening, with growing scrutiny of commodity chains by civil society organizations, unions, and to some extent organized employers.

The second issue, of subcontracting and the partial transition from wage labour to self employment (ZZP), also needs closer scrutiny from a long term global perspective, because there are many examples in which workers did (and do) prefer to start for themselves or work in teams for a subcontractor, because it gives them more autonomy, freedom, flexibility and sometimes even higher incomes. Studies on present day self employed former wage workers, brick makers in Western Europe(18th C.), Russia (19th C.) and India (now), but also the literature on proto-industrialization in various parts of the world since the 18th century, have shown this extensively. This is not to minimize the serious problems that David Weil addresses, but to call for a wider perspective that asks for the conditions under which various forms of ‘fissuring’ weaken or strengthen the bargaining power of workers.

David Weil (2014), The fissured workplace: why work became so bad for so many and hat can be done to improve it (Cambridge Mass., Harvard University Press).